You are here: Home » Blog » News » In the News » Spirit of Blue Awards Tourniquet Grant to Kentucky State Police in Memory of Fallen Trooper 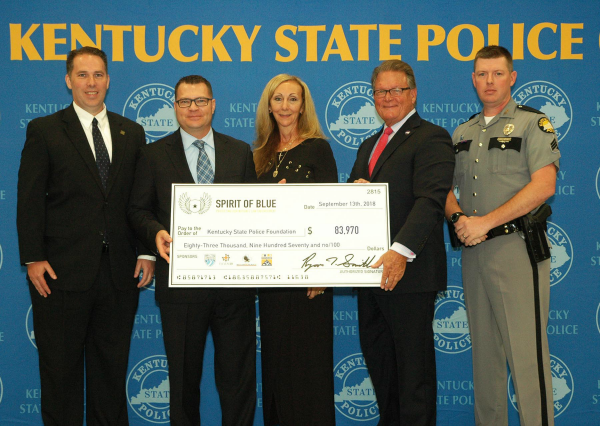 FRANKFORT, KENTUCKY – September 17, 2018 – The Spirit of Blue Foundation announced that it has awarded the Trooper Joseph Cameron Ponder Memorial Safety Grant to the Kentucky State Police Foundation (KSPF) to outfit all 1,000 troopers and officers of the Kentucky State Police with lifesaving tourniquets inside of rugged duty belt cases.  The KSP uniform policy was amended to include mandatory wear of the North American Rescue Gen7 C-A-T Tourniquet inside of an Eleven 10 RIGID TQ Case with High Gloss finish and Shirt Shield attachment as part of its official uniform.  Both companies worked with Spirit of Blue to configure the product specifically for KSP.  The grant was funded in large part by a strategic partnership with Law Enforcement United, along with contributions from Eleven 10, North American Rescue and Sportsmen Organized for Law Enforcement, along with a number of smaller private donations, and is valued at $83,970.

The grant is named after KSP Trooper Joseph Cameron Ponder, who was killed in the line of duty on Sept. 13, 2015.  Trooper Ponder’s mother, Brenda Tiffany, was instrumental in the inception of this safety grant and was on hand at a special ceremony held at the Kentucky State Police Training Academy on September 13, 2018.

According to Tiffany, this memorial grant is a very fitting way to help remember her son on the third anniversary of his death. “This is the first time I have looked forward to Sept. 13th,” she said. “It’s such a positive contribution on his behalf.”

“On behalf of the Kentucky State Police, I would like to thank The Spirit of Blue Foundation for this very generous grant,” said KSP Commissioner Rick Sanders. “This grant will allow every officer to have immediate access to an effective tool which may save a life of an officer or citizen.”

Tourniquets are vital pieces of medical equipment that officers require on the road in the event of a traumatic injury to an extremity. When only precious minutes exist to treat such an injury, tourniquets are able to be applied individually or on a fellow officer to prevent excessive blood loss until that individual can be placed into medical care.  As a secondary benefit, officers who carry a tourniquet are also able to use them to rescue a member of the community who may have experienced a similar type of injury.

“Tourniquets are quickly becoming one of our most granted pieces of equipment,” explained Ryan T. Smith, Executive Director of the Spirit of Blue Foundation. “The reason is because they are more affordable than most safety equipment and, sadly, officers need this type of lifesaving device more as threats to their lives, and others, become more prevalent.”

To date, Spirit of Blue has granted 2,196 tourniquets nationwide and five documented Community Saves have been made as a result.

Statistics released by the Officer Down Memorial Page show that 105 law enforcement officers have already lost their lives in 2018 – a 5% increase over the same period in the year previous.  40 of those deaths were firearm related, an 18% increase over the same period in 2017.  The reality of these statistics, and the increasing number of underfunded law enforcement agencies across the country, fuel the Spirit of Blue safety grant initiative.