You are here: Home » Blog » News » In the News » Livonia Police Department Receives Tourniquet Grant From The Spirit of Blue Foundation; One Life Already Saved 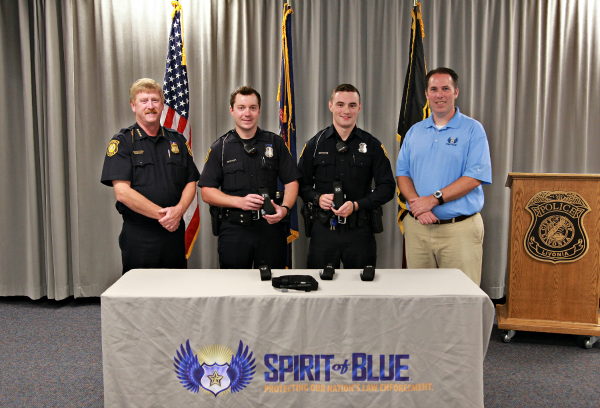 Chief Curtis Caid, along with Officers Alex Maher and Dominic Michels, of the Livonia Police Department (left to right) received the tourniquet safety grant from Spirit of Blue Executive Director Ryan T. Smith (right).  Officers Maher and Michels employed a granted tourniquet in July to save a member of the community.

DETROIT, MICHIGAN – August 30, 2018 – The Spirit of Blue Foundation announced that it has awarded a Safety Equipment Grant to the Livonia Police Department (LPD) to outfit its entire force of 150 officers with tourniquets and duty belt pouches.  The Gen7 C-A-T Tourniquets were purchased through North American Rescue and the Tourniquet NOW! Pouches were donated by Blue Force Gear.  The grant was funded by a partnership with Law Enforcement United and is valued at $8,892.

“On behalf of the members of the Livonia Police Department, I would like to thank The Spirit of Blue Foundation for this very generous grant,” stated Chief Curtis Caid.  “This grant will allow every officer to have immediate access to a lifesaving tourniquet, which may save a life of an officer or citizen.”

And in fact, the Livonia Police Department has already recorded a save with a granted tourniquet.  In July, LPD Officers Alex Maher and Dominic Michels responded to a medical emergency call and encountered an elderly woman whose medication port in her arm had become dislodged.  The woman had already experienced a massive amount of blood loss when they arrived on scene.  Reacting quickly, and captured by their body worn cameras, Officer Michels applied direct pressure to the wound while Officer Maher employed his granted tourniquet on the woman’s arm.  According to statements made by emergency room staff, who later treated the woman after she was transported to the hospital, her life was saved by their quick thinking and application of the tourniquet.

A video excerpt from the call can be viewed at this link (courtesy Livonia Police Department):  vimeo.com/287356798

Tourniquets are vital pieces of medical equipment that officers require on the road in the event of a traumatic injury to an extremity. When only precious minutes exist to treat such an injury, tourniquets are able to be applied individually or on a fellow officer to prevent excessive blood loss until that individual can be placed into medical care.  As a secondary benefit, officers who carry a tourniquet are also able to use them to rescue a member of the community who may have experienced a similar type of injury.

To date, Spirit of Blue has granted 2,196 tourniquets nationwide and four documented Community Saves have been made as a result.

“Tourniquets are quickly becoming one of our most granted pieces of equipment,” explained Ryan T. Smith, Executive Director of the Spirit of Blue Foundation.  “The reason is because they are more affordable than many other pieces of safety equipment and, sadly, officers need this type of lifesaving device more and more as their landscape changes and threats to their lives become more prevalent.”