You are here: Home » Blog » News » In the News » Chester Police Department Receives Tourniquet Grant From The Spirit of Blue Foundation 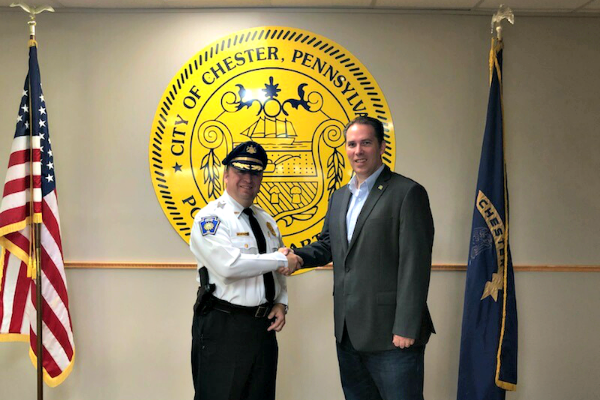 PHILADELPHIA, PENNSYLVANIA – May 31, 2018 – The Spirit of Blue Foundation announced that it has awarded a Safety Equipment Grant to the Chester Police Department (CPD) to outfit its entire force of 37 officers with tourniquets.  CPD requested the tourniquet grant from Spirit of Blue following an officer involved shooting in which Patrol Captain Alan Davis was severely injured.  One of his officers on the call had a personal tourniquet and used it to stabilize Captain Davis until he was able to be transported to a local medical facility.  Captain Davis survived the shooting but was forced to medically retire due to his injuries.  That incident demonstrated the need for tourniquets to be carried by each officer and led CPD to submit their grant request to the Spirit of Blue Foundation.  The tourniquets were purchased through North American Rescue and the grant was funded by a partnership with Law Enforcement United.  The tourniquets have already been put into use and the grant is valued at $1,125.

“Unfortunately, the Chester Police Department can personally attest to the usefulness of the Combat Application Tourniquet,” commented Commissioner Otis Blair of the CPD.  “This device has kept both members of the public and our department from tragedies.  Instead of having to make heartbreaking notifications to families and attending funeral services we are saving lives, building friendships, and strengthening bonds within our community – an investment far greater than any monetary expense.”

Tourniquets are vital pieces of medical equipment that officers require on the road in the event of a traumatic injury to an extremity. When only precious minutes exist to treat such an injury, tourniquets are able to be applied individually or on a co-worker to prevent excessive blood loss until that individual can be placed into medical care.  As a secondary benefit, officers who carry a tourniquet are also able to use them to rescue a member of the community who may have experienced a similar type injury.

CPD officers have already performed two community saves with the tourniquets they were granted.  One other documented community save was made with a granted tourniquet by the Monroe County Sheriff’s Office in Penfield, NY in July of 2017.  To date, Spirit of Blue has granted 996 tourniquets nationwide.

“Tourniquets should be thought of as a required piece of equipment for every officer in America,” explained Ryan T. Smith, Executive Director of the Spirit of Blue Foundation.  “The US Military has proven their effectiveness and now law enforcement agencies are beginning to roll them out.  Here, due to the overwhelming threats that the Chester Police face, we felt we should step in and make sure they had tourniquets as quickly as possible.”

Statistics released by the Officer Down Memorial Page show that 60 law enforcement officers have already lost their lives in 2018.  28 of those deaths were firearm related, a 47% increase over the same period in 2017.  The reality of these statistics, and the increasing number of underfunded law enforcement agencies across the country, fuel the Spirit of Blue safety grant initiative.