You are here: Home » Blog » News » In the News » Central Berks Regional Police Department Receives Tourniquet Grant From The Spirit of Blue Foundation 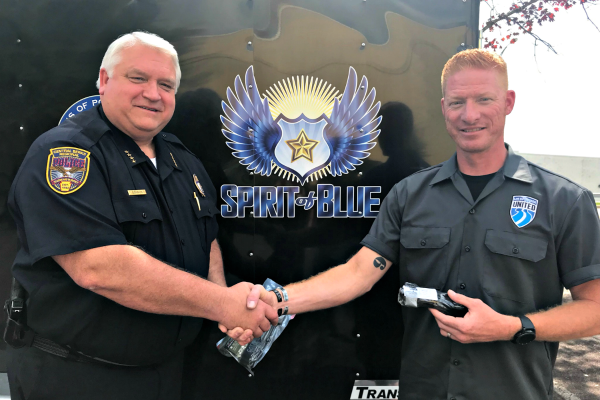 Image Caption – Chief Raymond Serafin of the Central Berks Regional Police Department (left) accepts the tourniquet grant from Wallace “Chad” Chadwick (right) who serves as the Executive Director of Law Enforcement United (LEU).  LEU sponsored this grant and was privileged to be able to make the presentation on behalf of Spirit of Blue.

READING, PENNSYLVANIA – June 7, 2018 – The Spirit of Blue Foundation announced that it has awarded a Safety Equipment Grant to the Central Berks Regional Police Department (CBRPD) to outfit its entire force of 20 officers with tourniquets, along with 15 trauma kits to be placed in their fleet of vehicles.  The tourniquets and trauma kits were purchased through North American Rescue and the tourniquet duty belt holders were provided by Blue Force Gear.  The grant was funded by a partnership with Law Enforcement United is valued at $2,609.

“I would like to thank Spirit of Blue for this generous grant,” stated Chief Raymond Serafin of the Central Berks Regional Police Department.  “Although it is gear that we pray we will never have to use, it is  comforting to know that we now possess this medical equipment that could save the life of a law enforcement officer or a civilian that we are sworn to protect if the need ever arises.”

Tourniquets are vital pieces of medical equipment that officers require on the road in the event of a traumatic injury to an extremity. When only precious minutes exist to treat such an injury, tourniquets are able to be applied individually or on a co-worker to prevent excessive blood loss until that individual can be placed into medical care.  As a secondary benefit, officers who carry a tourniquet are also able to use them to rescue a member of the community who may have experienced a similar type of injury.  The Individual Police Officer Kits (IPOK) will be placed in each of the department vehicles and contains an additional tourniquet, Combat Gauze, an emergency trauma dressing and sterile gloves.

To date, Spirit of Blue has granted 996 tourniquets nationwide and three documented Community Saves have been made as a result.