You are here: Home » Blog » News » In the News » Knox County Sheriff’s Office Receives Safety Equipment Grant from the Spirit of Blue Foundation 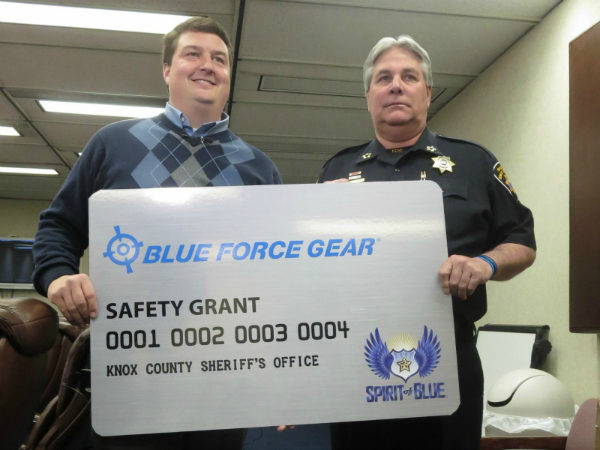 KNOXVILLE, TENNESSEE – March 24, 2014 – The Spirit of Blue Foundation announced today that it has awarded a Safety Equipment Grant to the Knox County Sheriff’s Office (KCSO) to outfit their officers with tactical emergency medical supplies. The grant provides 100 Combat Application Tourniquets (C-A-T) and 125 Tourniquet NOW! Straps for use by officers in the event of a traumatic extremity injury. Sheriff Jimmy “J.J.” Jones began issuing tourniquets after one of his officers was saved by the application of a tourniquet in 2013, but did not have the funding necessary to cover the entire agency. The grant was made possible by a generous gift from Blue Force Gear and is valued at $4,404.

On June 20, 2013 KCSO Officers were engaged in a gun fight with a barricaded subject when Sgt. Mike Ledbetter was shot in the leg. He was stabilized on the scene by fellow officers before being transported to a local hospital for immediate surgery. “I know the reason I am alive today is because one of the SWAT team members had a combat tourniquet and two other members knew how to use it,” Ledbetter said. He wholeheartedly supports the new policy for officers to carry trauma equipment while on duty. “The tourniquet saved me and could save other officers as well.” Sgt. Ledbetter is on his way to making a full recovery and has returned to work full-time.

The C-A-T Tourniquet, manufactured by North American Rescue, has proven to be 100% effective in occluding blood flow in both upper & lower extremities by the U.S. Army’s Institute of Surgical Research and has been the official tourniquet of the U.S. Army since 2005. The Tourniquet NOW! Strap, donated by Blue Force Gear, is designed to carry tourniquets on duty gear and will be worn by members of the Patrol Division, SWAT, Tracking, Crisis Negotiation, SORT, Dive, Marine and Shore, Special Hazards and Aviation teams.

“When agencies have safety equipment needs that they can’t fund on their own, that is when we step in,” commented Ryan T. Smith, Executive Director of the Spirit of Blue Foundation. “Through the funds we raise, and with great partners who believe in the cause of protecting our officers, we hope to meet more and more of these needs each year.”

2014 statistics preliminarily released by the National Law Enforcement Officers Memorial Fund show that 25 law enforcement officers have already lost their lives this year, an increase of 39% from the same period in the prior year. On average 56 firearms related deaths occur annually. The reality of these statistics, and the increasing number of underfunded law enforcement agencies across the country, fuel the Spirit of Blue safety grant initiative.