You are here: Home » Blog » News » In the News » New Middletown Police Department Receives Safety Equipment Grant From The Spirit of Blue Foundation 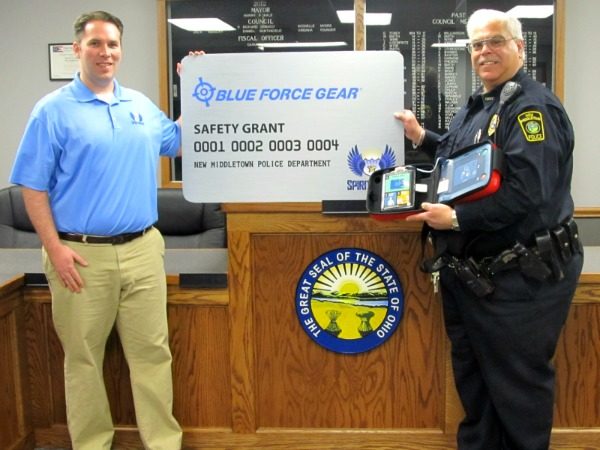 NEW MIDDLETOWN, OHIO – March 17, 2014 – The Spirit of Blue Foundation announced today that it has awarded a Safety Equipment Grant to New Middletown (OH) Police Department. The grant is for an Automated External Defibrillator (AED) that will be positioned in a patrol car and available to officers on duty at all times. The grant was made possible by a generous gift from Blue Force Gear and is valued at $1,609.00.

New Middletown is a vibrant suburb of Youngstown, Ohio with a population of 1,600 residents. The police department has 9 officers who serve the Village of New Middletown, 3 of which are over the age of 50.

“The immediate availability of having the AED in the patrol unit is critical in the event an officer suffers a heart attack during training, or a police incident,” stated Chief Vincent D’Egidio of the New Middletown Police Department. “The AED dramatically increases the survival opportunity for the officer in need.”

The Philips HeartStart OnSite AED is a simple to use medical device that provides on-demand audio coached AED and CPR guidance during the resuscitation of a sudden cardiac arrest victim. Paddles for both adults and children/infants were provided with the AED, as it will also be available for medical calls throughout the village.

“We talk about officer safety in terms of being able to go home safely at the end of each shift,” commented Ryan T. Smith, Executive Director of the Spirit of Blue. “But, when you have officers who have been working the road for 20-30 years, you need to consider a safe end to their careers as well. If that means ensuring an AED is available, then we are more than happy to provide it.”

2014 statistics preliminarily released by the National Law Enforcement Officers Memorial Fund show that so far this year 23 law enforcement officers have already lost their lives, an increase of 28% from the same period in the prior year. On average, 17 officers are lost each year due to on the job illness or health events.