You are here: Home » Blog » News » In the News » Kentucky State Police Trooper Saved With Granted Tourniquet From Spirit of Blue 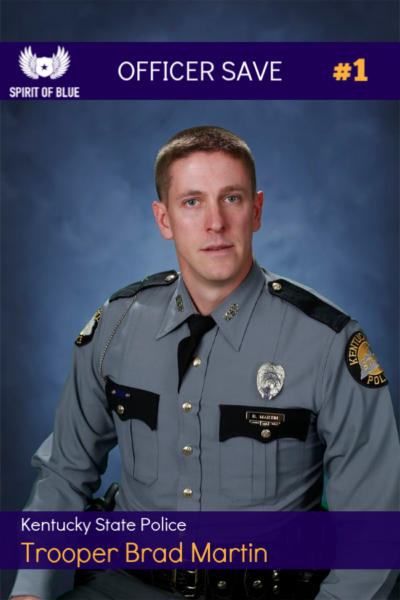 Kentucky State Police Trooper Brad Martin was shot in the leg while serving a warrant in Perry County on June 11, 2019. Due to the tourniquet granted by Spirit of Blue, and the swift action of fellow troopers, he made a full recovery and returned to duty.

FRANKFORT, KENTUCKY – February 17, 2020 – The Spirit of Blue Foundation is pleased to announce its first verified save of a law enforcement officer with equipment granted through its safety grant program.  On June 11, 2019, Kentucky State Police Trooper Brad Martin was taking part in serving a warrant in Perry County, Kentucky when he was fired upon and struck in the thigh.  Other troopers with him quickly got him to cover, applied a tourniquet and rushed him to a local medical center for treatment.  The tourniquet, now part of each Kentucky State Police trooper’s uniform, had been issued to each trooper just months before as a result of the Spirit of Blue grant. Trooper Martin has made a full recovery and returned to duty weeks later, crediting his survival to his fellow troopers on the scene and the tourniquet that was applied.

The Combat Application Tourniquet from North American Rescue, carried in a RIGID Tourniquet Case with High Gloss finish from Eleven-10, was issued to every Trooper and Officer with Kentucky State Police in September 2018.  The grant was made possible by sustaining sponsor Law Enforcement United, who has contributed to Spirit of Blue’s safety grant program since 2016.

Brenda Tiffany, mother of KSP Trooper Cameron Ponder who was lost in the line of duty in September 2015, advocated for the tourniquet grant and was instrumental in its being awarded.  “Since the day I lost my son, I have looked for ways to help protect his brothers in Gray,” commented Tiffany. “I had no idea how those efforts were going to impact someone so close to Cameron.”

Trooper Martin graduated with the Kentucky State Police Cadet Class 92 in January 2015 and was a roommate with Trooper Ponder during their time at the academy.  Out of that cadet class there have been two troopers lost in the line of duty – Trooper Eric Chrisman and Trooper Cameron Ponder.  Trooper Martin was almost the third.

“On June 11, 2019 I was participating in a warrant service when I was shot in the left thigh.  By the grace of God, I am still here today,” shared Trooper Martin.  “The prompt application of the tourniquet and quick action by my fellow brothers played a major part in limiting the extent of my injury and my ability to recover.”

“This feels like the moment that we have all been working toward,” said Ryan T. Smith, Executive Director of the Spirit of Blue.  “We have one single mission, and that is to ensure officers have access to the safety equipment they need to protect themselves or survive a dangerous encounter.  To see this trooper’s life saved as a result of a piece of equipment we granted is overwhelming.”

Officer Down Memorial Page reported 135 law enforcement officers lost their lives in 2019.  On average, 150 officers are lost in the line of duty annually.  47 of those deaths were firearm related, which was the leading cause of officer deaths that year.  The reality of these statistics, and the increasing number of underfunded law enforcement agencies across the country, fuel the Spirit of Blue safety grant initiative.