You are here: Home » Blog » News » In the News » Kane County Sheriff’s Office Receives Safety Grant from the Spirit of Blue Foundation. 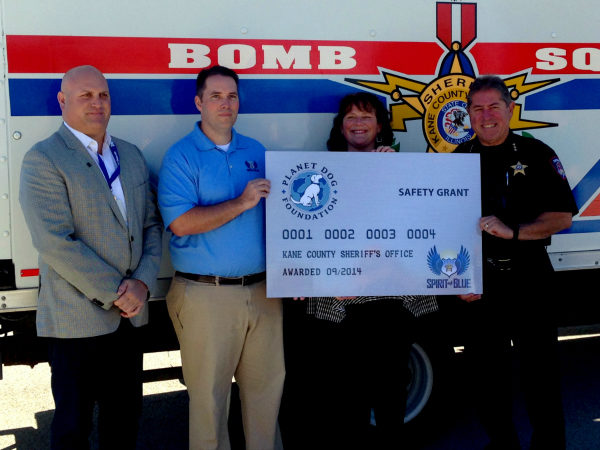 ST. CHARLES, ILLINOIS – September 23, 2014 – The Spirit of Blue Foundation announced today that it has awarded a Safety Grant to the Kane County Sheriff’s Office (KCSO) to acquire an explosives detection K9. The new dog will replace veteran K9 Gino when he retires at the end of the year and will be trained in explosive detection, tracking and handler protection. Brian Gregory from Northern Michigan K9 will supply the K9 and will train the dog to work with a selected handler from the KCSO. The $12,500 grant was co-sponsored by the Planet Dog Foundation, the charitable arm of dog toy and accessory manufacturer Planet Dog who has given over $1 million dollars to organizations that bring people and dogs together for fun and mutual support.

8-year old K9 Gino, a bomb-sniffing German Shepherd, has served with the KCSO since 2009. Deputy Bill Gatske, Gino’s handler, has served with the KCSO for 15 years and Gino will continue to live with Gatske and his family in retirement. Over his career, Gino has been involved in the 2009 LPGA Solheim Cup International Tournament held at Rich Harvest Farms near Sugar Grove, IL, performed numerous dignitary and presidential protective sweeps and participated in sweeps before games at Soldier Field in Chicago along with conducting countless explosive detection searches, suspect apprehensions and missing person searches. Gino may be most remembered, though, for his appearances with local area children where he taught the value of policing and reinforced the fact that law enforcement officers exists to serve their community.

“It is always difficult when we approach the end of the career of any of our employees, but whenever we have the opportunity to partner with groups like Spirit of Blue and the Planet Dog Foundation to help offset costs to hire and train new employees, or in this case new four legged employees, it is a win-win situation for all involved,” said Sheriff Patrick B. Perez. “The ability to have K9 teams trained to find explosives are not something the public thinks about, but as a professional law enforcement organization it is an invaluable tool in our response plans.”

2014 statistics preliminarily released by the National Law Enforcement Officers Memorial Fund show that 88 law enforcement officers have already lost their lives this year, an increase of 17% from the same period in the prior year. Firearm related fatalities have reached 37, a 61% increase. The reality of these statistics, and the increasing number of underfunded law enforcement agencies across the country, fuel the Spirit of Blue safety grant initiative.