You are here: Home » Blog » News » In the News » Spirit of Blue Presents Grant to Franklin Police Department on Grand Ole Opry Stage 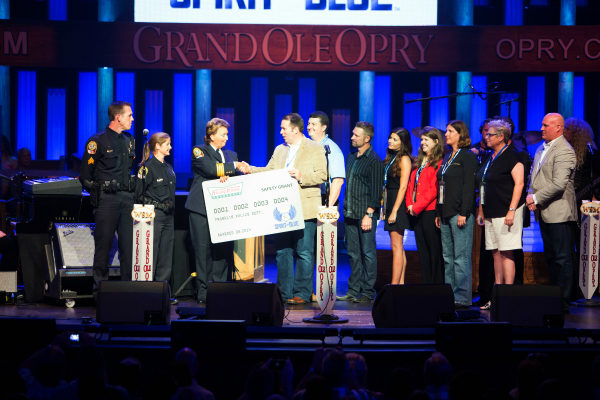 NASHVILLE, TENNESSEE – August 27, 2014 – The Spirit of Blue Foundation took a rare opportunity to present its latest Safety Equipment Grant to the Franklin Police Department on the stage of the Grand Ole Opry. Country music star Craig Morgan led the Opry and its guests in honoring law enforcement officers at a recent show and invited the Spirit of Blue’s Board of Directors out on stage to formally present the grant. Valued at over $7,000, the grant will secure the purchase of ballistic protection helmets for all 17 members of the Franklin Police Department SWAT Team. The grant was sponsored by Krispy Kreme Doughnuts, who raised funds for the Spirit of Blue at their five store locations in the greater-Nashville area in the month of July.

“We are so grateful to Spirit of Blue, their partners, and everyone who so generously made this possible,” said Chief Deb Faulkner, who received the grant on behalf of the Franklin Police Department. “With this grant, we will increase the level of safety for the men and women our community depends on for protection. Keeping those police officers safe is important to a lot of people, especially the families who wait for them to come home every night.”

The Franklin Police Department teamed with its community supporters to drive traffic into local area Krispy Kreme stores to purchase doughnuts to raise money for the grant. For every second dozen doughnuts purchased from July 14-31, Krispy Kreme donated $1.00 to the Spirit of Blue. On Saturday, July 26th the Franklin Police SWAT Team conducted a public safety rally at the Mallory Lane Krispy Kreme store to introduce SWAT officers to the public and explain the jobs they perform and show how the equipment they use keeps them safer. The following week, citizens dropped boxes of doughnuts by to the Franklin Police Department each day to encourage officers and show their support in raising funds for the grant.

2014 statistics preliminarily released by the National Law Enforcement Officers Memorial Fund show that 77 law enforcement officers have already lost their lives this year, an increase of 18% from the same period in the prior year. Firearm related fatalities have reached 31, a 62% increase. The reality of these statistics, and the increasing number of underfunded law enforcement agencies across the country, fuel the Spirit of Blue safety grant initiative.