You are here: Home » Blog » News » In the News » Gainesville Police Department Receives Safety Grant from the Spirit of Blue Foundation and Dunkin’ Donuts 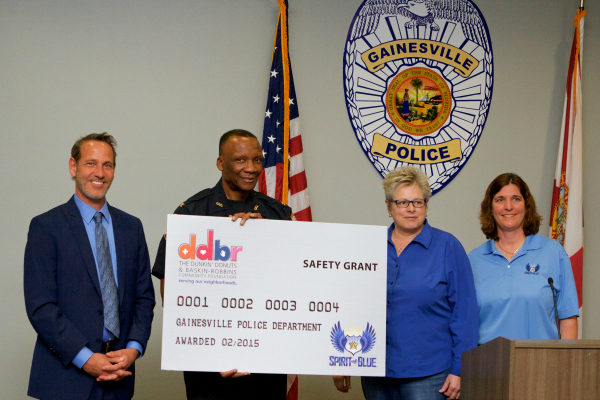 Image Caption – The Spirit of Blue safety training grant was presented at the Gainesville Police Headquarters Building on February 24th. In attendance were (from left to right) Jeffrey Weisberg of the River Phoenix Center for Peacebuilding; Chief Tony Jones of the Gainesville Police Department; and Board Members Diane Harbour and Sue Post of the Spirit of Blue Foundation.

GAINESVILLE, FLORIDA – February 26, 2015 – The Spirit of Blue Foundation announced today that it has awarded a Safety Training Grant to the Gainesville Police Department (GPD) to obtain valuable Police/Youth Dialogue training. The focus of this training is on building understanding and cooperation between the city’s minority youth and the 302 police officers who serve the Gainesville community. The River Phoenix Center for Peacebuilding, also based in Gainesville, will be conducting the training sessions and will work with the GPD to develop a comprehensive curriculum allowing the training program to be replicated by law enforcement agencies in communities all across the country.

“When we sit down in a secure environment and have open dialog, it allows us all to learn more about each other and see why each other operates in a certain way” said Chief Tony Jones of the Gainesville Police Department, who frequently reminds his officers and the public that the police cannot arrest their way out of crime. “We saw an issue with how minority youth were contacted and arrested. Instead of sitting back and ignoring the issue, we decided not only to talk about it, but to do something about it. This grant will allow us to do even more. While you may not see a piece of equipment purchased with these funds, you’ll see a tangible return – a city with a great relationship with all of its community.”

The $6,375 grant was funded primarily through a generous donation from The Dunkin’ Donuts & Baskin-Robbins Community Foundation who partners with organizations to support public safety officers, in addition to a number of other initiatives to build safer communities. The Harbour Family Trust, a private fund formed in memory of late Detroit automotive industry veteran James Harbour, also contributed to the funding of the grant.

“There is a lot of value in granting safety equipment to law enforcement officers, which is what we typically do,” stated Ryan T. Smith, Executive Director of the Spirit of Blue Foundation. “But we are excited to enable this Police/Youth Dialogue training program because it is inherently proactive, building a sense of emotional intelligence between these two groups who interact on a daily basis. If we can prevent conflict from occurring in those interactions then we have helped to create a safer environment from the outset.”

Statistics released by the National Law Enforcement Officers Memorial Fund showed 126 law enforcement officers lost their lives in the line of duty in 2014, an increase of 24% from the previous year. 50 of those fatalities were firearm related, a 56% increase. The reality of these statistics, and the increasing number of underfunded law enforcement agencies across the country, fuel the Spirit of Blue safety grant initiative.

About The Dunkin’ Donuts & Baskin-Robbins Community Foundation: The mission of The Dunkin’ Donuts & Baskin-Robbins Community Foundation is to serve its neighborhoods by taking care of their basic needs: hunger, children’s health and safety. The DDBRCF brings together a wide network of stakeholders, including franchisees, crew members and employees to serve their local communities. Launched in 2006, The DDBRCF has granted more than $4,500,000 to local charities.