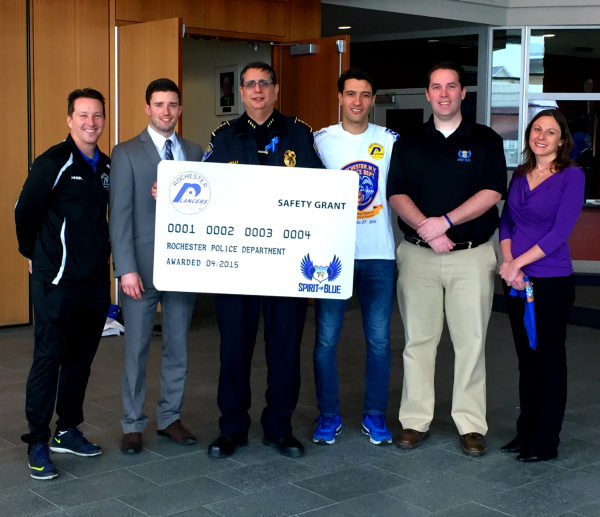 ROCHESTER, NEW YORK – April 13, 2015 – The Spirit of Blue Foundation announced today that it has awarded a Safety Equipment Grant to the Rochester Police Department (RPD) for the purchase of 8 ballistic vests, valued at $10,440. Funding for the grant was provided by a generous gift from the Rochester Lancers who raised funds at their December 27th game dedicated to honoring area first responders. The grant was given in memory of fallen RPD Officer Daryl Pierson who was killed in the line of duty in September 2014.

“We are very grateful to the Spirit of Blue and the Rochester Lancers for making this effort to show they care about their police officers,” stated Chief Michael Ciminelli of the Rochester Police Department. The Paragon6 NIJ Level II concealable ballistic vests will be purchased from Survival Armor and will include a spare outer carrier. The vests will be tailored to the individual officer receiving it to ensure proper fit and coverage and will be issued to the eight RPD officers later this year.

“As a locally owned and operated business here in Rochester, we truly appreciate the officers in this community and their daily commitment to our citizens,” said Rich Randall, President of the Rochester Lancers. “We are proud to extend this gift and thankful for the generosity of those that participated in this initiative.”

“The entire community was impacted when Officer Pierson was lost,” commented Ryan T. Smith, Executive Director of the Spirit of Blue Foundation. “It was a pleasure to work with the Lancers to help express their desire to make an impact for officer safety and to see this new body armor go out onto the street to bring an added layer of protection for these officers.”

2015 statistics released by the National Law Enforcement Officers Memorial Fund show that 32 law enforcement officers have already lost their lives this year, an increase of 10% from the same period in the prior year. On average, 56 firearm-related deaths occur annually. The reality of these statistics, and the increasing number of underfunded law enforcement agencies across the country, fuel the Spirit of Blue safety grant initiative.