You are here: Home » Blog » News » In the News » Spirit of Blue Awards Tourniquet Grant to Oceanside Police Department 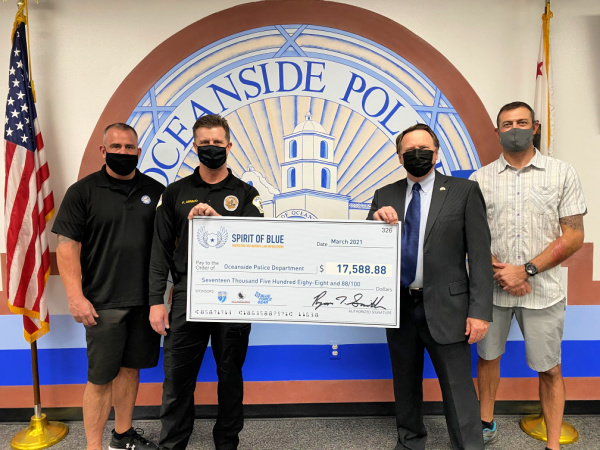 On March 5th, 2021 the Oceanside Police Department was officially presented with a safety equipment grant to outfit all of their officers with lifesaving tourniquets and carrying pouches at a private ceremony. Accepting the grant (left to right) was Oceanside Police Officers’ Association President Jim Ridenour and Interim Chief Fred Armijo. Presenting the grant was Spirit of Blue Board Chairman Dale Stockton and Oceanside Firefighter-Paramedic Bryan Howell.

OCEANSIDE, CALIFORNIA – March 10, 2021 – The Spirit of Blue Foundation announced that it has awarded a Safety Equipment Grant to the Oceanside Police Department (OPD) to outfit their entire force of officers with lifesaving tourniquets inside of rugged carrying pouches. The OPD uniform policy was amended to include mandatory wear of the North American Rescue Gen7 C-A-T Tourniquet inside of a Blue Force Gear Tourniquet NOW! Pouch as part of its official uniform. The grant was funded in large part by a strategic partnership with Law Enforcement United, along with contributions collected by the Oceanside Police Officers’ Association through a GoFundMe campaign, and is valued at $17,588.

“We are very grateful for Spirit of Blue’s generosity. In the past, individual officers have purchased their own tourniquets and put them to use when providing aide to injured members of the public. With Spirit of Blue’s very generous donation, all officers are now positioned to aid one another and our community, should the need arise,” commented Capt. Fred Armijo, Interim Chief of Police for the Oceanside Police Department. “We are also very grateful for the efforts of Oceanside Firefighter-Paramedic Bryan Howell for spear-heading this effort.”

Firefighter-Paramedic Bryan Howell of the Oceanside Fire Department had originally launched the effort to equip OPD officers with tourniquets. He often supports the OPD SWAT Team as a medic and recognized that officers lacked this lifesaving tool. He created a GoFundMe page, in collaboration with the Oceanside Police Officers’ Association, and began taking donations in from members of the community. Spirit of Blue became aware of the campaign and offered to cover the balance of funds required in order to get the tourniquets purchased.

Tourniquets have proven to be incredibly effective in stemming blood flow to an injured extremity, and their use has vastly improved the survivability of soldiers in combat over the last two decades. That learning overseas is now being leveraged to save injured law enforcement officers here at home. When only precious minutes exist to treat such an injury, tourniquets are able to be applied individually or on a fellow officer to prevent excessive blood loss until that individual can be placed into medical care. As a secondary benefit, officers who carry a tourniquet are also able to use them to rescue a member of the community who may have experienced a similar type of injury. Spirit of Blue Foundation will replace any tourniquet that is used in the line of duty for the duration of an officer’s career so that no officer who uses their tourniquet will have to go without one in the future.

To date, Spirit of Blue has granted 4,420 tourniquets nationwide which have resulted in 14 documented saves – 13 of community members by officers with granted equipment and one save of a Kentucky State Trooper which came in June of 2019.

“This is a great department,” stated Dale Stockton, Spirit of Blue Board Chairman. “They were very appreciative and I know these tourniquets will go a long way towards enhancing safety for their officers and community members.”

The lead sponsor for the grant was Law Enforcement United (LEU), who has supported Spirit of Blue with over $382,000 in safety grant funding since 2015. LEU is an organization of active and retired police officers who honor fallen officers and raise funds to assist charitable organizations that serve the law enforcement community. Each year LEU members ride 250 miles or more into Washington, DC to participate in National Police Week events and carry flags in honor of fallen officers which are given to the surviving family members upon their arrival. Since its founding in 2009, LEU has raised over $7,250,000 for law enforcement causes.

Other sponsors include the Ford Fund and Sportsmen Organized for Law Enforcement, along with assistance from North American Rescue and Blue Force Gear who offered special pricing on the equipment.

On average, 150 officers are lost in the line of duty each year, but losses have increased dramatically due to COVID-19, reaching 354 last year. The leading cause of death (other than disease) was automobile related with 47, while firearm deaths followed closely at 45 in 2020. The reality of these statistics, and the increasing number of underfunded law enforcement agencies across the country, fuel the Spirit of Blue safety grant initiative.