You are here: Home » Blog » News » In the News » Spirit of Blue Awards Tourniquet Grant to Lyon County Sheriff’s Office 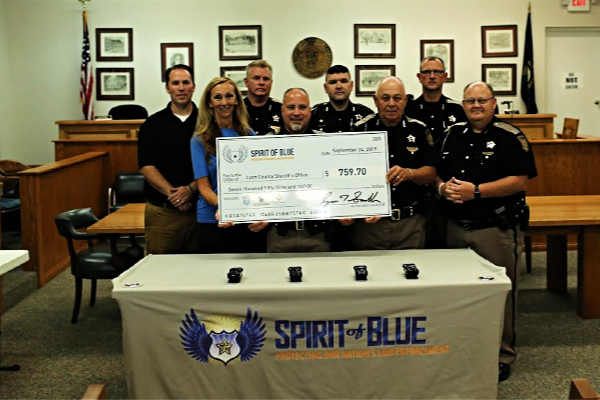 Presenting the 2019 Trooper Cameron Ponder Memorial Grant was (left to right) Ryan T. Smith, Executive Director of Spirit of Blue and Brenda Tiffany, Trooper Ponder’s mother and Ambassador for Spirit of Blue. Receiving the grant was Lyon County Sheriff Brent White (center) and a number of his deputies.

EDDYVILLE, KENTUCKY – October 8, 2019 – The Spirit of Blue Foundation announced that it has awarded the 2019 Trooper Cameron Ponder Memorial Safety Grant to the Lyon County Sheriff’s Office (LCSO) to outfit the Sheriff and all deputies with lifesaving tourniquets inside of rugged duty belt cases.  The LCSO uniform policy was amended to include mandatory wear of the North American Rescue Gen7 C-A-T Tourniquet inside of an Eleven 10 RIGID TQ Case with High Gloss finish as part of its official uniform.  The grant was funded in large part by a strategic partnership with Law Enforcement United, along with contributions from North American Rescue and Eleven 10, and is valued at $759.70.

This memorial grant is awarded each year in the State of Kentucky in memory of Kentucky State Police Trooper Cameron Ponder, who was killed in the line of duty on Sept. 13, 2015 along a stretch of Interstate 24 that runs through Lyon County.  The sheriff of Lyon County, Brent White, served previously with the Kentucky State Police and was Trooper Ponder’s Lieutenant at Post 1 Mayfield where Ponder completed his field training and evaluation.  Sheriff White retired from KSP in 2017 and was elected sheriff in 2018.

“It seemed very fitting to me to award this year’s grant in memory of Cameron to Lyon County,” commented Brenda Tiffany, Trooper Ponder’s mother and Ambassador of the Spirit of Blue Foundation, who was present for the grant presentation ceremony.  “Cameron had strong ties to Western Kentucky and to Sheriff White.  What this community did for us, and still does for our family since we lost Cameron…I think he’d be smiling down right now on a community he considered family.”

“We are humbled to receive this lifesaving equipment in memory of Trooper Ponder’s service to our community, Commonwealth and nation,” said Lyon County Sheriff Brent White.  “While wearing these tourniquets, we will never forget the ultimate sacrifice Trooper Ponder paid in Lyon County in September of 2015.  We are very appreciative to Trooper Ponder’s family, the Spirit of Blue Foundation, and Law Enforcement United for making this grant possible.”

Tourniquets are vital pieces of medical equipment that officers require on the road in the event of a traumatic injury to an extremity. When only precious minutes exist to treat such an injury, tourniquets are able to be applied individually or on a fellow officer to prevent excessive blood loss until that individual can be placed into medical care.  As a secondary benefit, officers who carry a tourniquet are also able to use them to rescue a member of the community who may have experienced a similar type of injury.  Spirit of Blue Foundation will replace any tourniquet that is used in the line of duty for the life of the tourniquet so that no officer who uses their tourniquet will have to go without one in the future.

To date, Spirit of Blue has granted over 3,300 tourniquets nationwide which have resulted in six documented saves.  Two of those saves were in the State of Kentucky, of which one was the Foundation’s first officer save which came in June of 2019.

The lead sponsor for the grant was Law Enforcement United (LEU), who has supported Spirit of Blue with over $280,000 in safety grant funding since 2015.  LEU is an organization of 1,000 active and retired police officers who honor fallen officers and raise funds to assist charitable organizations that serve the law enforcement community.  Each year LEU members ride 250 miles or more into Washington, DC to participate in National Police Week events and carry flags in honor of fallen officers which are given to the surviving family members upon their arrival.  Since its founding in 2009, LEU has raised over $6,750,000 for law enforcement causes.  Other sponsors included North American Rescue and Eleven 10 who offered special pricing on the equipment.

Statistics released by the Officer Down Memorial Page show that 95 law enforcement officers have already lost their lives in 2019.  On average, 150 officers are lost in the line of duty each year.  36 of those deaths were firearm related, which so far has been the leading cause of officer deaths this year.  The reality of these statistics, and the increasing number of underfunded law enforcement agencies across the country, fuel the Spirit of Blue safety grant initiative. 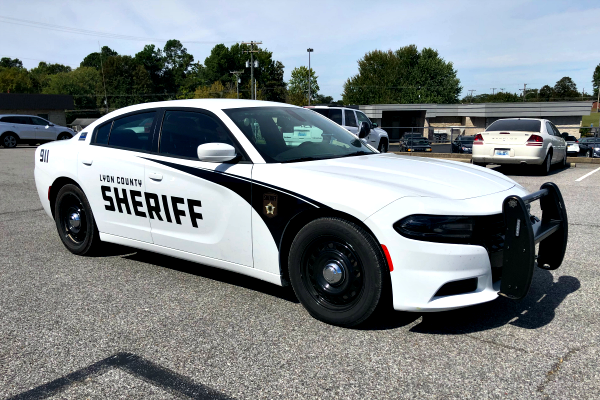