You are here: Home » Blog » News » In the News » Revere Police Department Receives Safety Equipment Grant From The Spirit of Blue Foundation 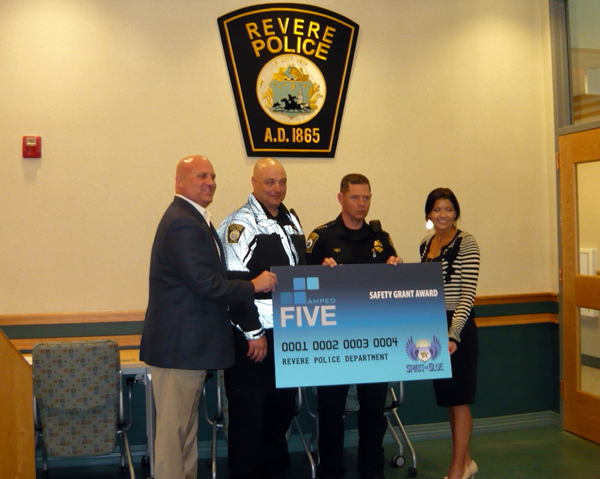 Image Caption – A formal presentation of the Amped Five Safety Equipment Grant was made to members of the Revere Police Department at their headquarters facility on April 25, 2013. At the presentation were (left to right) Todd Parola, Spirit of Blue Chairman of the Board and co-founder; Patrolman David Wilson and Chief Joseph Cafarelli of the Revere Police Department; and Melissa Parola, Spirit of Blue Vice-Chairman for Operations and co-founder.

BOSTON, MASSACHUESSETS – May 17, 2013 – The Spirit of Blue Foundation announced today that it has awarded a copy of the Amped FIVE Professional forensic image and video enhancement software to the Revere Police Department as part of its 2013 Safety Grant Program. A formal presentation of the software was made on April 25th at the Revere Police Headquarters to Chief Joseph Cafarelli and Patrolman David Wilson who will take the lead on implementing this new crime-fighting tool. The grant award process with the Revere Police began when the Spirit of Blue Foundation first became aware of the agency’s need in late January. The announcement of the grant was delayed due to the sensitive nature of ongoing investigations utilizing the Amped Software.

The grant award was made possible by a generous gift from Amped Software North America and will be utilized by investigators in their daily work and on major cases. Amped Software played an instrumental and unsung role in the Boston Marathon bombing investigation in April of this year by providing free access to investigative units for use of this software tool and by coding new custom applications to allow investigators to work with the specific video data formats that were being provided by the public.

“Events in the Boston area in April underscore the importance and critical role that this type of software can play. Just days after the bombing, law enforcement had tens of thousands of hours of cell phone and CCTV footage to comb through. Without a tool like Amped FIVE Professional that footage could have been rendered unusable. As we know now, law enforcement’s ability to enhance and analyze that footage brought about the crucial break in identifying the suspects in the case,” commented Todd Parola, who serves the Spirit of Blue as the Chairman of the Board of Directors. “The Revere community in particular has made significant investments in their surveillance capability and Amped FIVE Professional will allow them to unlock the full value of the data they are now able to collect.”

The Spirit of Blue Foundation works nationally to support the Law Enforcement community through the award of Safety Equipment Grants, funded by both private and corporate donations. Corporate donations of funds and product from companies like Amped Software coincides with a major fundraising push by the Foundation, which includes a new Public Service Announcement featuring Emmy-nominated actor Vincent D’Onofrio (star of ‘Law & Order: Criminal Intent’) appearing on Outdoor Channel and a new text-to-pledge campaign fueled by Mobile Cause that allows donations to be submitted by texting “BLUE” to 41444. With a goal of raising $25,000 by July 1st, 2013, the Foundation and its partners hope to realize a dramatic impact in the safety of the nation’s law enforcement officers.

2012 statistics released by the National Law Enforcement Officers Memorial Fund, in conjunction with Concerns of Police Survivors, revealed the number of U.S. law enforcement officers killed in the line of duty totaled 129, a 22% percent decrease from 2011. Firearm-related deaths reached 49, a decrease of 32% for the same period. While progress is being made, the reality of these statistics and the increasing number of underfunded law enforcement agencies across the country fuel the Spirit of Blue safety grant initiative.