You are here: Home » Blog » News » In the News » Portland Police Bureau Receives Safety Equipment Grant From The Spirit of Blue Foundation 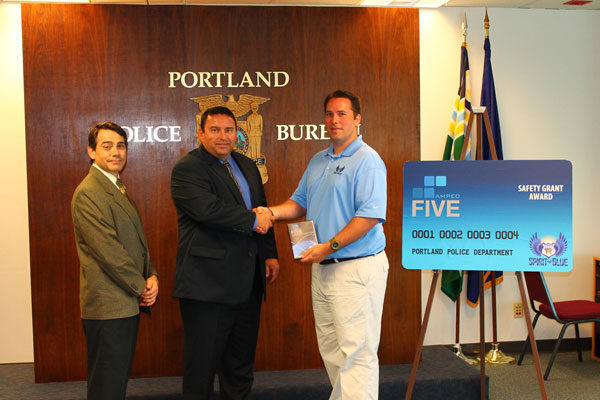 PORTLAND, OREGON – September 4, 2012 – The Spirit of Blue Foundation announced today that it has awarded a copy of the Amped FIVE Professional forensic image and video enhancement software to the Portland Police Bureau as part of its 2012 Safety Grant Program. The grant, made possible by a generous gift from Amped Software North America, will be utilized by the Forensic Evidence Division to aid investigators in their work. A formal presentation of the software was made at the Portland Central Precinct to Sgt. Ron Mason and Mr. Chris Wormdahl, who will lead the division in its use.

“With the increased workload on our photo lab specialists to download and copy more and more surveillance video from various locations throughout the city (bars, parking lots, ATM’s, stores, etc.) I am looking forward to the Amped FIVE Professional software being utilized to enhance the quality and clarity of the data collected,” stated Chris Wormdahl, Police ID Technologies Coordinator. “Many of these surveillance recorders require proprietary software to play and have poor image quality. With Amped Five in our toolbox we have a better chance of pulling useful images out of the data and a better chance of gaining positive leads in a case.”

“A sophisticated tool like Amped FIVE can cost an agency a significant amount of money to acquire, and has to compete with other items in the budget to get funded,” commented Ryan T. Smith, who serves the Spirit of Blue as the Vice-Chairman of Grants and Sponsorships. “We know that Portland has a technically savvy team of investigators who could utilize the tool if they simply had access to it. We are happy to offer this grant to them, in partnership with Amped Software, to get them started.”

The Spirit of Blue Foundation works nationally to support the Law Enforcement community through raising funds to award to agencies as Safety Equipment Grants. The Foundation awarded a Bushmaster rifle to the Chicago Police Department in May of this year, and has plans for 10 more grants to be awarded before the end of 2012. In addition to Amped Software, who is the most recent Safety Grant Sponsor to join, the Spirit of Blue works in partnership with Blue Force Gear, Magpul Industries, Combat Medical Systems, L3-EOTech, A-TACS Camo, Leupold Tactical Optics, Bushmaster Firearms and SentrySafe. Together, the Foundation and its partners hope to realize a dramatic impact in the safety of the nation’s law enforcement officers.

Preliminary 2012 Year-To-Date Statistics released by the National Law Enforcement Officers Memorial Fund, in conjunction with Concerns of Police Survivors, revealed the number of U.S. law enforcement officers killed in the line of duty this year have totaled 75, a 36% percent decrease from the same period in 2011. Firearm-related deaths have reached 28, a decrease of 44% for the same period. While progress is being made, the reality of these statistics and the increasing number of underfunded law enforcement agencies across the country fuel the Spirit of Blue safety grant initiative.