You are here: Home » Blog » News » In the News » Georgia Bureau of Investigation Receives Safety Equipment Grant from the Spirit of Blue Foundation 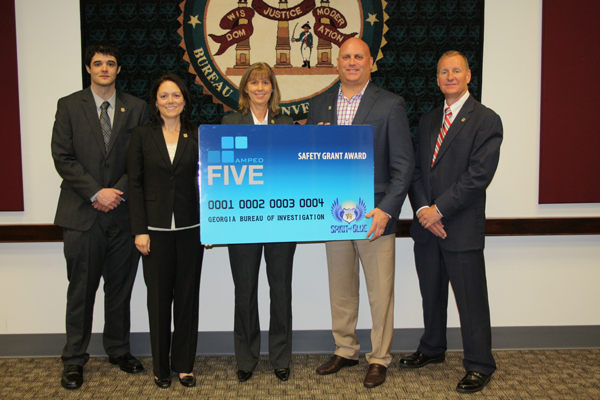 Image Caption – The Amped FIVE software was presented at the GBI headquarters on May 10, 2013 by Todd Parola (second from right) Co-Founder and Chairman of the Board of the Spirit of Blue Foundation. Representing the Georgia Bureau of Investigation (from left to right) were Digital Forensic Investigator Matthew Heath, Assistant Special Agent in Charge Cynthia Adkins, Digital Forensic Investigator Supervisor Beth Messick, and Deputy Director Rusty Andrews.

ATLANTA, GEORGIA – December 5, 2013 – The Spirit of Blue Foundation announced today that it has awarded a copy of the Amped FIVE Professional forensic image and video enhancement software to the Georgia Bureau of Investigation as part of its 2013 Safety Grant Program. A formal presentation of the software was made at the GBI Headquarters in Decatur, GA on May 10th, 2013 to Deputy Director Rusty Andrews, Assistant Special Agent in Charge Cynthia Adkins and members of the forensic unit who are utilizing this new tool in their investigations. The announcement of the grant was delayed due to the sensitive nature of ongoing investigations utilizing the Amped Software. The grant award was made possible by a generous gift from Amped Software North America and will be utilized by investigators in their daily work and on major cases.

“GBI is finding itself dealing with more and more investigations that contain video and image evidence that they need help enhancing,” commented Todd Parola, who serves the Spirit of Blue as the Chairman of the Board of Directors. “Not only did they demonstrate the impressive capabilities that Amped FIVE now gives them while we visited them at their headquarters, but in true southern fashion they hosted us with a freshly baked red velvet cake, courtesy of the GBI Director’s own mother. They are true professionals through and through.”

“The receipt and use of the Amped Five software from the Spirit of Blue Foundation has given the Georgia Bureau of Investigation the advantage of quick turnaround and great results in video enhancement cases in the State of Georgia,” added Assistant Special Agent in Charge Cynthia Adkins who works with the Bureau’s Child Exploitation and Computer Crimes Unit.

2013 preliminary statistics released by the National Law Enforcement Officers Memorial Fund reveal the number of U.S. law enforcement officers killed in the line of duty so far this year have totaled 95, a12% percent decrease from the same period in 2012. Firearm-related deaths have reached 28, a decrease of 32% for the same period. While progress is being made, the reality of these statistics and the increasing number of underfunded law enforcement agencies across the country fuel the Spirit of Blue safety grant initiative.