You are here: Home » Blog » News » In the News » Troy Police Department Receives Safety Equipment Grant From The Spirit of Blue Foundation 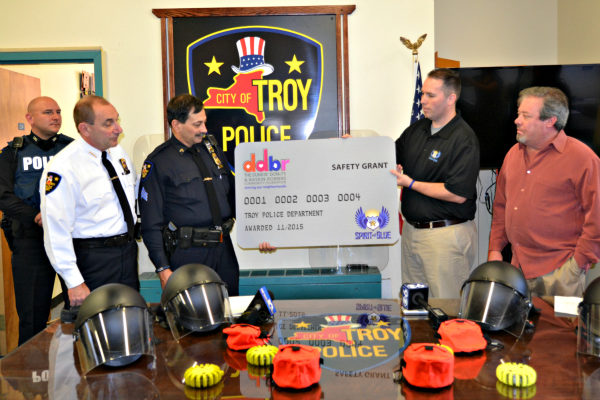 TROY, NEW YORK – November 19, 2015 – The Spirit of Blue Foundation announced today that it has awarded a Safety Equipment Grant to the Troy Police Department (TPD) for the purchase of riot and crowd control equipment along with electronic flares for use by their officers in traffic enforcement roles, valued at $5,025. One dozen crowd control helmets and shields were awarded to outfit officers, providing protection while dealing with protests, civil unrest and other crowd control situations and has long been a need of the department. The TPD plans to train with and assist other neighboring agencies in the Capital Region to be able to respond to these types of incidents. Sixteen PowerFlare LED flares were also granted to outfit eight individual traffic and patrol cars providing brighter, reusable illumination during traffic enforcement duties as opposed to traditional flammable flares. The PowerFlares will help motorists to be alerted to the presence of a police officer working on the roadway and will help to direct them in safe passage around the officer and their vehicle.

“This comes at a critical time for our department,” said Sergeant Sam Carello, head of the Troy Police Department’s Traffic and Community Policing Unit. “It allows our department to be better prepared and will enable us to perform our duties in a highly efficient and safe manner. We are thankful to the Spirit of Blue Foundation for this grant.”

Funding for the grant was provided by a generous gift from The Dunkin’ Donuts & Baskin-Robbins Community Foundation (DDBRCF), which serves our neighborhoods through children’s health, hunger relief and safety. Since 2006, together with Dunkin’ Brands franchisees, The DDBRCF has awarded $11 million in grants to local charities such as food banks and children’s hospitals. In total the DDBRCF has enabled Spirit of Blue to make 17 Safety Equipment Grants throughout New England with a total value of more than $100,000.

“Initially this grant was just going to provide traffic awareness equipment to help the Troy Police Traffic Division be more visible in their work on the roads of their community,” explained Ryan T. Smith, Executive Director of the Spirit of Blue Foundation. “But shortly after we notified them of their grant award they contacted us and shared how their landscape had changed and that they were in critical need of riot control gear. We quickly restructured the grant, fast-tracked the purchase of the new equipment and got it to them so they had the resources they needed to protect their officers when dealing with protests and civil unrest.”

2015 statistics released by the National Law Enforcement Officers Memorial Fund show that 111 law enforcement officers have already lost their lives this year, an increase of 11% from the same period in the prior year. Of those deaths, 48 were traffic-related, an increase of 26%. The reality of these statistics, and the increasing number of underfunded law enforcement agencies across the country, fuel the Spirit of Blue safety grant initiative.