You are here: Home » Blog » News » In the News » Beaverton Police Department Receives K9 Safety Grant from the Spirit of Blue Foundation 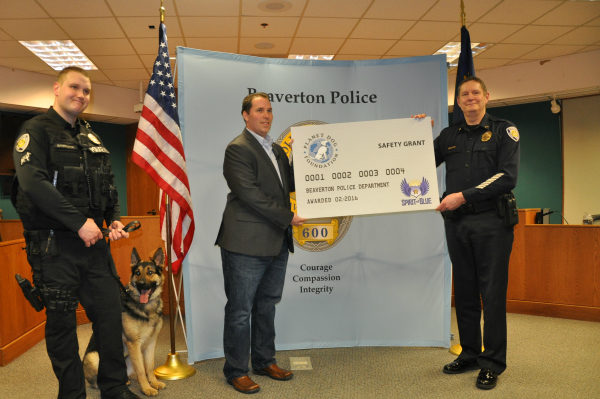 Image Caption – Spirit of Blue presented a $2,500 grant to the Beaverton Police Department for the acquisition of a new K9 working dog, sponsored by the Planet Dog Foundation. The grant was presented by Ryan T. Smith of Spirit of Blue (center) and was received by (left to right) Officer Matt Barrington, K9 Atlas and Chief Geoff Spalding.

BEAVERTON, OREGON – February 8, 2016 – The Spirit of Blue Foundation announced that it has awarded a K9 Safety Grant to the Beaverton Police Department (BPD) to contribute to the acquisition of a tracking and article search K9. The new dog will replace veteran K9 Alex who retired at the first of the year after serving for 8 years with Officer Steve Anderson. The $2,500 grant was sponsored by the Planet Dog Foundation, the charitable arm of dog toy and accessory manufacturer Planet Dog who, has given over $1 million dollars to organizations that bring people and dogs together for fun and mutual support.

“The Beaverton Police K9 Program sets the standard in this area of the country,” said Ryan T. Smith, Executive Director of the Spirit of Blue. “Not only will K9 Atlas be a great resource for this city, but he will bring an added layer of protection to the officers in Beaverton and will continue a legacy of excellence in this program and others that are influenced by it.” Smith served as a Reserve Police Officer with the Beaverton Police Department from 1999-2006.

K9 Atlas is a 24 month old male German Shepherd, bred in Hungary, who received his initial training at the Vohne Liche Kennels in Denver, IN. His K9 handler will be Officer Matt Barrington, in his first role as a K9 officer, who has been with the department for eight years. Officer Barrington and K9 Atlas are currently in a 10-week K9 Academy program and will begin working the road in Mid-March of 2016. K9’s bring an auditory and olfactory advantage to police work, able to track subjects and identify articles not easily found by their human counterparts. But, all K9’s are trained to protect their handlers, making them an effective less lethal force option while enhancing the safety of officers on duty.

“The Planet Dog Foundation is proud to sponsor the great work of essential canine partners like Atlas,” added Stephanie Volo, Chief Retail Officer of Planet Dog, Inc. “We welcome the opportunity to partner with the Spirit of Blue Foundation to offer needed grants to deserving agencies such as this.”

Statistics released by the National Law Enforcement Officers Memorial Fund show that 124 law enforcement officers lost their lives in 2015, an increase of 4% from the prior year. 42 of those officers were firearm related fatalities, while 35 were lost as a result of a motor vehicle crash. In addition, the Officer Down Memorial Page reported that 26 K9 working dogs were lost in 2015 as well. The reality of these statistics, and the increasing number of underfunded law enforcement agencies across the country, fuel the Spirit of Blue safety grant initiative.